It is very unusual for FLARE to analyze a prolifically-used, privately-developed backdoor only to later have the source code and operator tools fall into our laps. Yet this is the extraordinary circumstance that sets the stage for CARBANAK Week, a four-part blog series that commences with this post.

CARBANAK is one of the most full-featured backdoors around. It was used to perpetrate millions of dollars in financial crimes, largely by the group we track as FIN7. In 2017, Tom Bennett and Barry Vengerik published Behind the CARBANAK Backdoor, which was the product of a deep and broad analysis of CARBANAK samples and FIN7 activity across several years. On the heels of that publication, our colleague Nick Carr uncovered a pair of RAR archives containing CARBANAK source code, builders, and other tools (both available in VirusTotal: kb3r1p and apwmie).

FLARE malware analysis requests are typically limited to a few dozen files at most. But the CARBANAK source code was 20MB comprising 755 files, with 39 binaries and 100,000 lines of code. Our goal was to find threat intelligence we missed in our previous analyses. How does an analyst respond to a request with such breadth and open-ended scope? And what did we find?

My friend Tom Bennett and I spoke about this briefly in our 2018 FireEye Cyber Defense Summit talk, Hello, Carbanak! In this blog series, we will expound at length and share a written retrospective on the inferences drawn in our previous public analysis based on binary code reverse engineering. In this first part, I’ll discuss Russian language concerns, translated graphical user interfaces of CARBANAK tools, and anti-analysis tactics as seen from a source code perspective. We will also explain an interesting twist where analyzing the source code surprisingly proved to be just as difficult as analyzing the binary, if not more. There’s a lot here; buckle up!

The objective of this analysis was to discover threat intelligence gaps and better protect our customers. To begin, I wanted to assemble a cross-reference of source code files and concepts of specific interest. 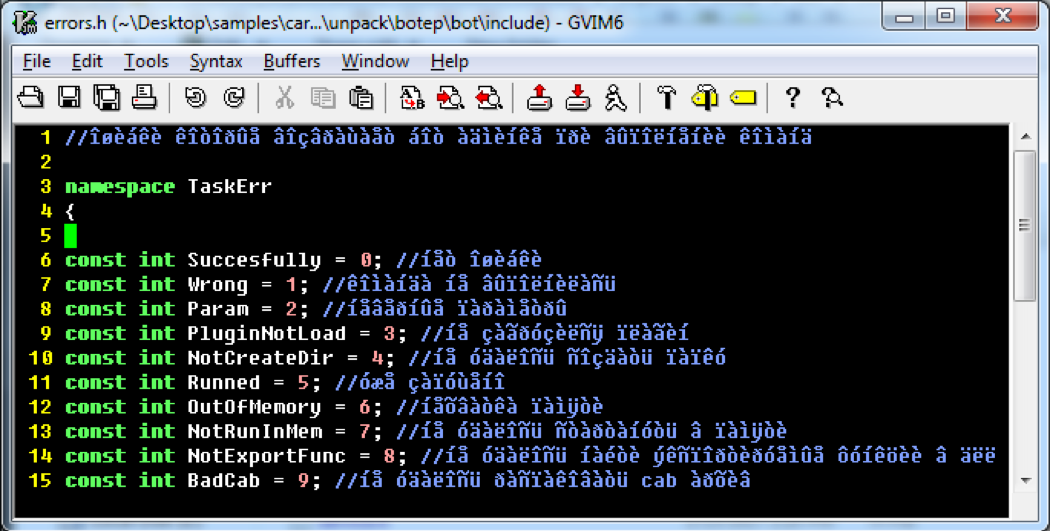 Figure 2 is a C++ header file defining error values involved in backdoor command execution. Most identifiers were in English, but some were not particularly descriptive. Ergo, the second and more difficult step was learning some Russian to benefit from the context offered by the source code comments.

FLARE has fluent Russian speakers, but I took it upon myself to minimize my use of other analysts’ time. To this end, I wrote a script to tear through files and create a prioritized vocabulary list. The script, which is available in the FireEye vocab_scraper GitHub repository, walks source directories finding all character sequences outside the printable lower ASCII range: decimal values 32 (the space character) through 126 (the tilde character “~”) inclusive. The script adds each word to a Python defaultdict_ and increments its count. Finally, the script orders this dictionary by frequency of occurrence and dumps it to a file.

The result was a 3,400+ word vocabulary list, partially shown in Figure 3. 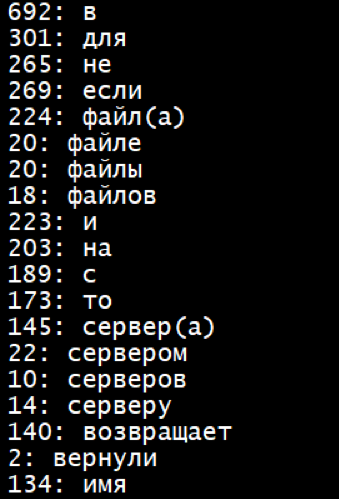 I spent several hours on Russian language learning websites to study the pronunciation of Cyrillic characters and Russian words. Then, I looked up the top 600+ words and created a small dictionary. I added Russian language input to an analysis VM and used Microsoft’s on-screen keyboard (osk.exe) to navigate the Cyrillic keyboard layout and look up definitions.

One helpful effect of learning to pronounce Cyrillic characters was my newfound recognition of English loan words (words that are borrowed from English and transliterated to Cyrillic). My small vocabulary allowed me to read many comments without looking anything up. Table 1 shows a short sampling of some of the English loan words I encountered. 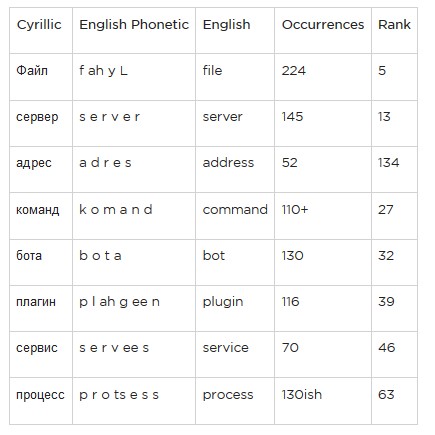 Aside from source code comments, understanding how to read and type in Cyrillic came in handy for translating the CARBANAK graphical user interfaces I found in the source code dump. Figure 4 shows a Command and Control (C2) user interface for CARBANAK that I translated. 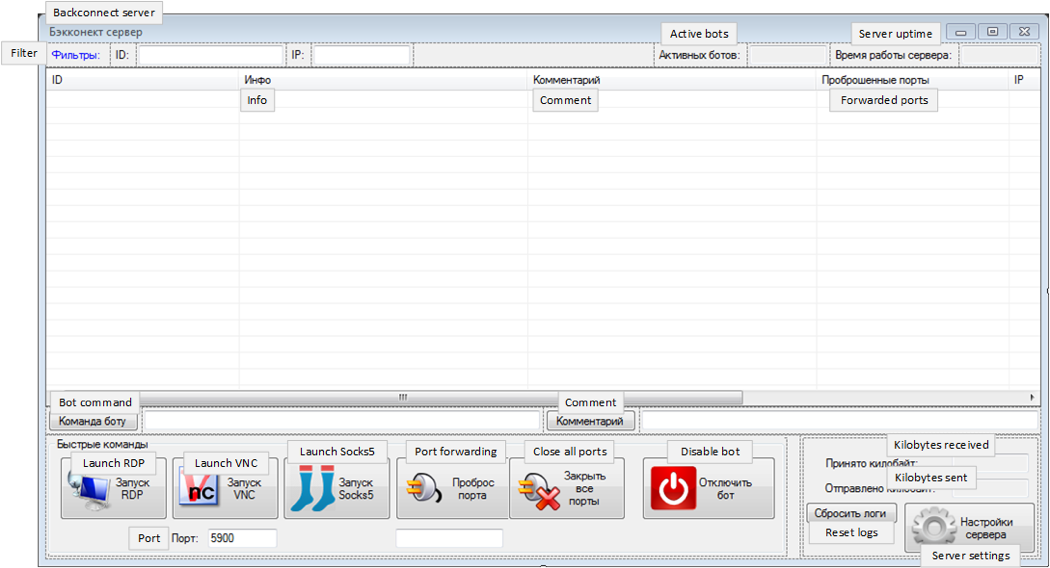 These user interfaces included video management and playback applications as shown in Figure 5 and Figure 6 respectively. Tom will share some interesting work he did with these in a subsequent part of this blog series. 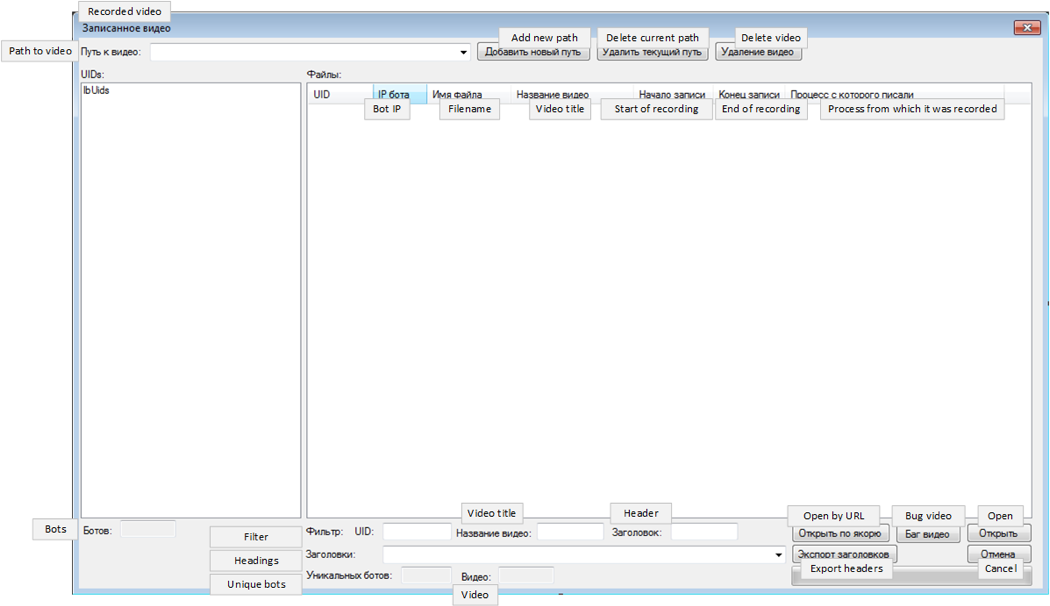 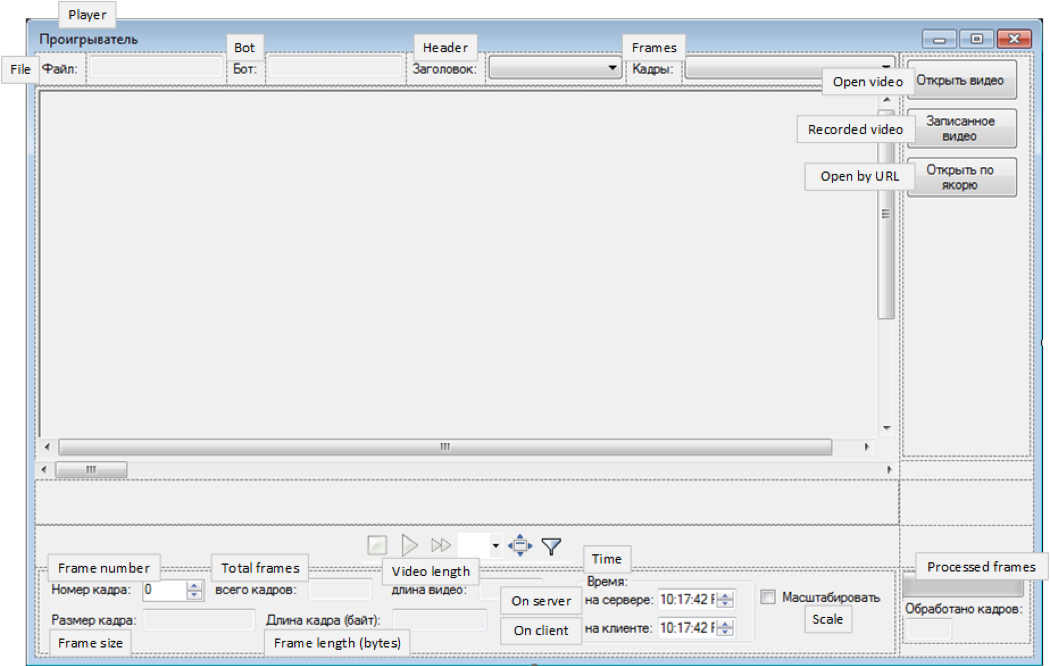 Figure 7 shows the backdoor builder that was contained within the RAR archive of operator tools. 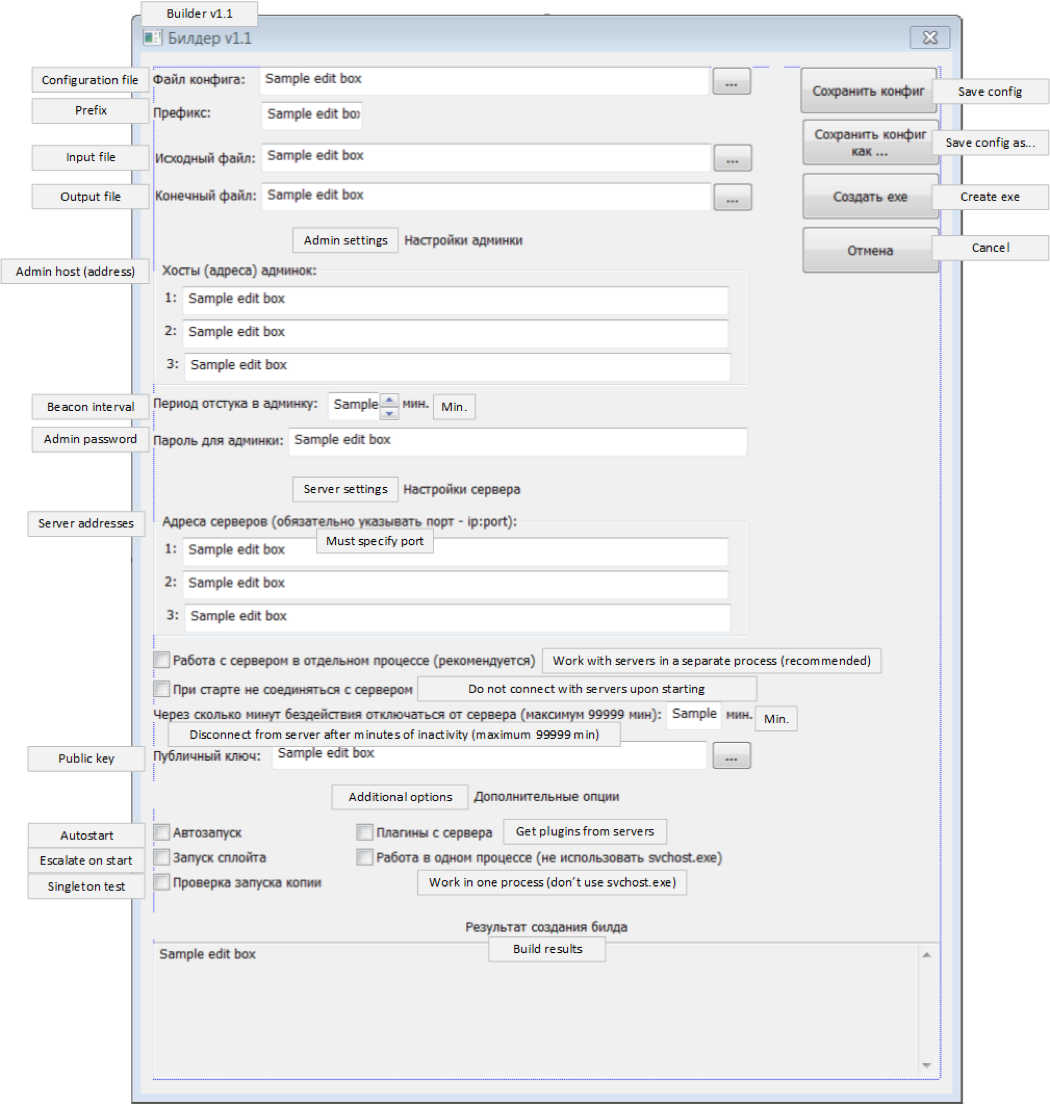 The operator RAR archive also contained an operator’s manual explaining the semantics of all the backdoor commands. Figure 8 shows the first few commands in this manual, both in Russian and English (translated).

Down the Rabbit Hole: When Having Source Code Does Not Help

In simpler backdoors, a single function evaluates the command ID received from the C2 server and dispatches control to the correct function to carry out the command. For example, a backdoor might ask its C2 server for a command and receive a response bearing the command ID 0x67. The dispatch function in the backdoor will check the command ID against several different values, including 0x67, which as an example might call a function to shovel a reverse shell to the C2 server. Figure 9 shows a control flow graph of such a function as viewed in IDA Pro. Each block of code checks against a command ID and either passes control to the appropriate command handling code, or moves on to check for the next command ID.

In this regard, CARBANAK is an entirely different beast. It utilizes a Windows mechanism called named pipes as a means of communication and coordination across all the threads, processes, and plugins under the backdoor’s control. When the CARBANAK tasking component receives a command, it forwards the command over a named pipe where it travels through several different functions that process the message, possibly writing it to one or more additional named pipes, until it arrives at its destination where the specified command is finally handled. Command handlers may even specify their own named pipe to request more data from the C2 server. When the C2 server returns the data, CARBANAK writes the result to this auxiliary named pipe and a callback function is triggered to handle the response data asynchronously. CARBANAK’s named pipe-based tasking component is flexible enough to control both inherent command handlers and plugins. It also allows for the possibility of a local client to dispatch commands to CARBANAK without the use of a network. In fact, not only did we write such a client to aid in analysis and testing, but such a client, named botcmd.exe, was also present in the source dump.

Analyzing this command-handling mechanism within CARBANAK from a binary perspective was certainly challenging. It required maintaining tabs for many different views into the disassembly, and a sort of textual map of command ids and named pipe names to describe the journey of an inbound command through the various pipes and functions before arriving at its destination. Figure 10 shows the control flow graphs for seven of the named pipe message handling functions. While it was difficult to analyze this from a binary reverse engineering perspective, having compiled code combined with the features that a good disassembler such as IDA Pro provides made it less harrowing than Mike’s experience. The binary perspective saved me from having to search across several source files and deal with ambiguous function names. The disassembler features allowed me to easily follow cross-references for functions and global variables and to open multiple, related views into the code.

Having source code sounds like cheat-mode for malware analysis. Indeed, source code contains much information that is lost through the compilation and linking process. Even so, CARBANAK’s tasking component (for handling commands sent by the C2 server) serves as a counter-example. Depending on the C2 protocol used and the command being processed, control flow may take divergent paths through different functions only to converge again later and accomplish the same command. Analysis required bouncing around between almost 20 functions in 5 files, often backtracking to recover information about function pointers and parameters that were passed in from as many as 18 layers back. Analysis also entailed resolving matters of C++ class inheritance, scope ambiguity, overloaded functions, and control flow termination upon named pipe usage. The overall effect was that this was difficult to analyze, even in source code.

I only embarked on this top-to-bottom journey once, to search for any surprises. The effort gave me an appreciation for the baroque machinery the authors constructed either for the sake of obfuscation or flexibility. I felt like this was done at least in part to obscure relationships and hinder timely analysis.

CARBANAK’s executable code is filled with logic that pushes hexadecimal numbers to the same function, followed by an indirect call against the returned value. This is easily recognizable as obfuscated function import resolution, wherein CARBANAK uses a simple string hash known as PJW (named after its author, P.J. Weinberger) to locate Windows API functions without disclosing their names. A Python implementation of the PJW hash is shown in Figure 11 for reference.

This is used several hundred times in CARBANAK samples and impedes understanding of the malware’s functionality. Fortunately, reversers can use the flare-ida scripts to annotate the obfuscated imports, as shown in Figure 12. 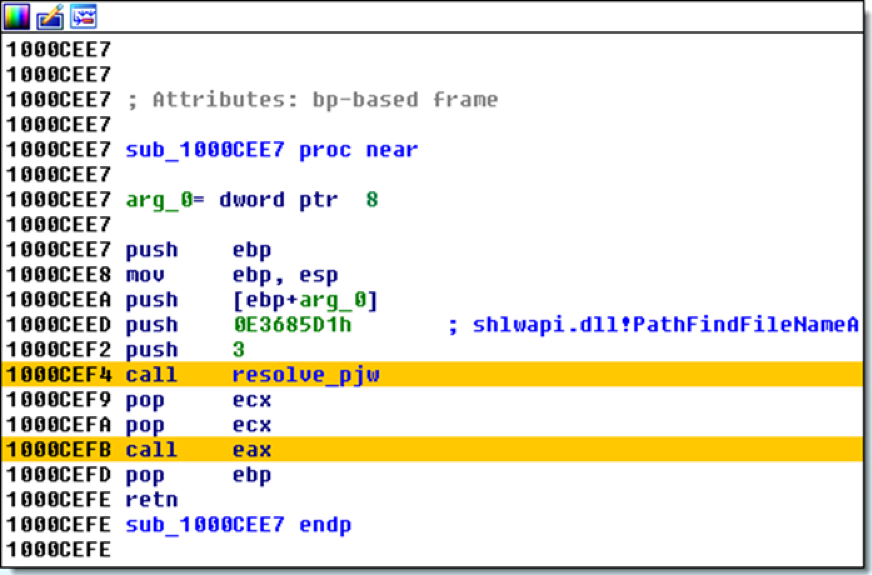 The CARBANAK source code has a utility (unimaginatively named tool) that scans source code for invocations of the API macro to build a header file defining string hashes for all the Windows API function names encountered in the entire codebase. Figure 14 shows the source code for this utility along with its output file, api_funcs_hash.h.

When I reverse engineer obfuscated malware, I can’t help but try to theorize about how authors implement their obfuscations. The CARBANAK source code gives another data point into how malware authors wield the powerful C preprocessor along with custom code scanning and code generation tools to obfuscate without imposing an undue burden on developers. This might provide future perspective in terms of what to expect from malware authors in the future and may help identify units of potential code reuse in future projects as well as rate their significance. It would be trivial to apply this to new projects, but with the source code being on VirusTotal, this level of code sharing may not represent shared authorship. Also, the source code is accessibly instructive in why malware would push an integer as well as a hash to resolve functions: because the integer is an index into an array of module handles that are opened in advance and associated with these pre-defined integers.

The CARBANAK source code is illustrative of how these malware authors addressed some of the practical concerns of obfuscation. Both the tasking code and the Windows API resolution system represent significant investments in throwing malware analysts off the scent of this backdoor. Check out Part Two of this series for a round-up of antivirus evasions, exploits, secrets, key material, authorship artifacts, and network-based indicators.